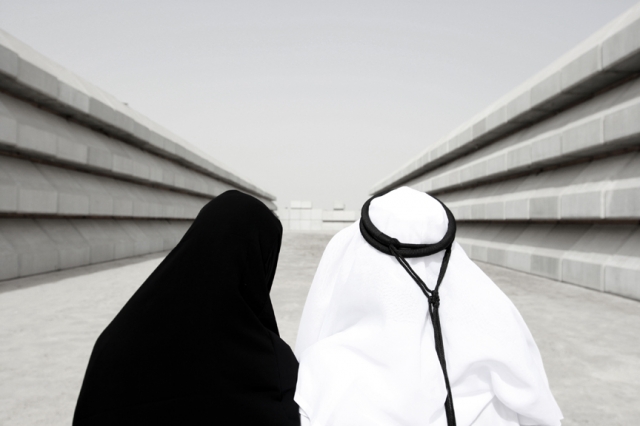 This image is part of a broader series entitled "The Edge Of Now” (EON). EON was shot in Dubai during the apex of the city’s real estate and financial boom in 2008. The series intended to depict an extreme and provocative portrayal of life within the ever evolving and imaginative aspiration of the "Dubai Dream". Just like Dubai at the time, EON blurred the boundaries between the past, present and the future, and between reality and the imagination.

In order to make the visual experience as original a representation as possible, all photographs where shot on location using props and models dressed in traditional Emirati thobes. None of the images are digitally created montages.The series even includes a set of images from the only photo shoot, other than a documentary by the BBC, to be conducted on the roof of Ski Dubai at Mall of the Emirates.

The series also serves as an evocative visual commentary on the currently stigmatized (and stereotypical) visual depiction of Arabs in the mass global media, and brings into question notions of identity and belonging within the regions newly emerged technological and industrial landscape.

The EON series was first exhibited at Tashkeel Studio in Dubai in March 2008, and was received with  high acclaim by both the Emirati and international community in the U.A.E. The original series went on to be exhibited at a pivotal UAE exhibition at the Vitra Design Museum in Germany in 2008 entitled "Dubai Next: Face of the 21st Century",which coincided with Art Basel that year. Since then, select images from the series have been exhibited in Dubai and New York, and have recently been selected to be part of the Artist Pension Trust international collection.

Your limited edition print was successfully added to your cart.